I am looking for any information regarding L. (Lars?) Heigaard (spelling varies substantially).

The information I have is that he was purportedly born in Denmark in 1805 and died there in 1851. That information is uncorroborated, although the name is Danish.

At some point he lived in Iceland, apparently near Baegisa. He may have been working there as a veterinarian. He fathered a child, Nicolai Heigaard, who was baptized on 12/25/1828 at Baegisa. The mother of the child was Rosa Kristjansdottir, born in 1805 in Bakki.

Any information you have would be greatly appreciated.

Actually I believe one of his descendents, Bill Heigaard, is a perennial office seeker in North Dakota, ran for governor a few years ago but lost. Also took part in the play “In the Wake of the Storm” which toured Iceland a few seasons ago from the huge metropolis of Mountain, North Dakota. As to Nicolai - he married Elsa María, daughter of Thorsteinn Gunnlaugsson and Gu?rí?ur Sigur?ardóttir. One of their children (I think they had 5) was Kristján Thór?ur b 1855 who emigrated with his wife Jónína Pétursdóttir in 1892, settling in Gardar Township, Pembina County, North Dakota. However, I have not tied the family together beyond this, as of now can’t even prove they are the same Heigaard (or Haagar? or Hoggard or ..., spelled several different ways). Nicolai’s mother may have been the daughter of Kristján Sigur?sson and Helga Sigfúsdóttir of Bakki, but can’t verify that. I also have ancestors from that area in Iceland, so likely would be tied in there somehow! Let me know if you are interested in establishing the descendents’ trail. I can give you some contacts, but I have not had time to pursue it myself as yet.

Actually, I have quite a bit of information regarding the descendants of Lars Heigaard, just not his Danish ancestors, or much confirmation regarding his mother Rosa Kristjansdottir (I too think that Kristjan Sigurdsson and Helga Sigfusdottir of Bakki are her parents). Bill Heigaard is my cousin.

Nicolai Hojgaard (yes, the spellings vary considerably) married Elsa Maria Thorsteinsdottir on 9/13/1852, but her father was Thorsteinn "sterki" Gudmundsson (not Gunlaugsson) and her mother was as you said Gudridur Sigurdardottir.

Nicolai and Elsa Maria had at least 5 children, including my great-grandfather, Thorsteinn N. Hygaard (1853-1907) who immigrated to Gardar, ND with his wife Ingigerdur Ofeigsdottir (1852-1925) in 1882. Ingigerdur's mother (Gudrun Thorgrimsdottir) and stepfather (Grimur Einarsson) had come to N.D. in 1876. Gudrun Thorgrimsdottir died in 1882 and is buried in Gardar.

What I have is that he came to Iceland in the winter of 1826-27 to do verternary work. He may or may not have been married to Rosa Kristjansdottir, with whom he had a son Nicolaus. I have more information than this, but am replying quickly. I am not sure how much I have on Lars but will find out what I can if you would like me to.
Senest redigeret=5 Sep 2015
Lars Heigaard blev født 9 august 1805 i København 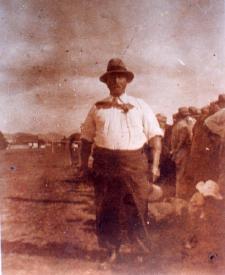