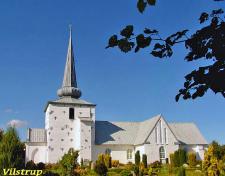 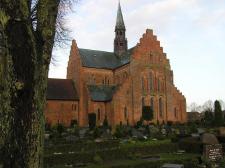 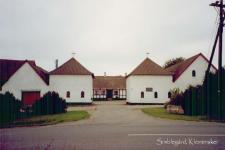 The parentage of Gunhild Uf is uncertain and disputed. She must have been born between 1500 and 1532. What seems to be agreed is that she is the descendant of Otte Pedersen Uf, the owner of Skovsholm in Ibsker parish. Some say she is his daughter's daughter (datterdatter). Other'sthat she is the daughter of his son Anders Uf, from Otte's first marriage to Kirsten Galen. It has also been suggested by Sigvard Mahler Dam that she is the daughter of Otte Pedersen Uf's grandson Hans Olufsen Uf (1510-1574); possibly because she gave her son with Mads Jensen Kofoed the name Hans - after her father?

It is known that in 1547 Gunhild's husband Mads Jensen Kofoed represented her in a legal dispute with Mogens Uf (died 1565) concerning inherited property from the estate of the deceased Oluf Tuesen. This implies that there is a close relationship with Mogens Uf; some have suggested they are brother and sister, others that they are cousins. Considering that Oluf Tuesen died in 1500, it seems unlikely that Gunhild is his daughter - as she would have been approaching 50 at the time of the birth of her son, Hans Madsen Kofoed. Possibly she is the daughter of Oluf Tuesen's brother-in-law Oluf Ottesen Uf? Or, as Sigvard Mahler Dam has suggested, the daughter of Oluf's son Hans?

The following has been extracted from a translation of the article 'Landet Borringholm: Bornholmsk-skånske slægtskredse', by Sigvard Mahler Dam, published in SAXO, 1986:

After the murder of Mogens Ufs' father Oluf Tuesen, his widow (Margrethe?) went through hard times, but her brothers helped her prove to Commander van Haffn which of the farms were her own inheritance, and these were eventually given back to her. Her brothers helped with the management, but then a pivotal event took place, which later caused a devastating family feud over inheritance. Apparently Oluf Ottesen purchased some property from the widow, and in the later court case some letters and documents supposedly were proof thereof, but her son, MogensUf, maintained that the family had unlawfully confiscated said property.

In 1547 Mogens Uf, still exiled from Bornholm, came to blows with his own family and took them to the highest court in the land:

The case concerns Mogens Uf's inheritance from his mother, against Gunhild Uf, who must be a descendant of his mother's brother, Oluf Ottesen. Gunhild's husband, Mads Jensen Kofoed, sailed to København on behalf of his wife and her co-heirs (who were under-aged). Mads won the case and returned home able to keep the deeds to the farms contested by Mogens Uf. But in 1552 Mogens Uf is back again to haunt Gunhild's family:

That same day the king sent a letter to his bailiff on Bornholm, Henning Gagge, requesting that he quickly settle the case between Mogens Uf and Otte Pedersen's heirs. It had become bothersome to the king, the very men he depended upon to resist the Lübeckers were about to destroy everything with their family feuding. How the court case ended is not known, but it seems that Mogens Uf lost again.