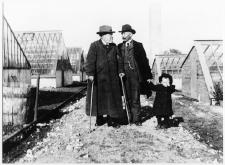 Niels (Jensen) journeyed to Bornholm to install his nephew as Commander of Hammershus. Archbishop Niels took ill that November, and started to prepare a testament, although he did not feel ill enough to finalize it. He survived over Christmas, but in January his illness worsened, and on February 3rd he had his final testament recorded. He died two days later.

His testament provides valuable information about his family. His nephew Jens Uf was appointed as the executor of the testament. The Archbishop willed Jens his largest drinking-horn of gilded silver, and some bottles painted with Niels Jensen's coat-of-arms. Jens Uf's fiancee (According to Aage Kure she was Marine/Maren Pedersdatter Munk - Norman Madsen) received 80 pieces of fur for a coat, as well as the chess set Niels had received from Queen Margrete. Jens Uf's daughter Cecilie was given a gold-ring. From the records we find that Cecilie's mother must have died, and her father had just been betrothed.

Jens Uf's sister, Marine, received Niels' best chest and a furlined cape. Since Tage Mus' daughter Marine received a cape also, we can presume that the first mentioned Marine was married to Tage Mus. Next a sum is given to the Archbishop's brother's son Peder Larsen, as Niels owed him and his step-brothers 26 mark silver 'which their father, Lars Jensen, our brother' lent him so that he could travel to Rome, a journey he apparently had to pay for himself.

'Our frænke, Estrid, Mogens Mogensen's wife' was the next person mentioned in the testament. 'Frænke' was a word used for female relations far removed, and since Estrid is mentioned among nieces and nephews, she must belong to 'inheritance class 4' to which aunts and uncles also belong. Estrid must have been the daughter of one of Niels Jensen's uncles or aunts, as Niels by this time was pretty old.

A great span of time follows the March 23, 1416 document in which time Peder Uf, then between 30-35 years old, acted as a witness at a land-transaction in Nyker. It is not until 1493 that his son 'Otte Pedersen Wff' appears in the Bornholmer records, as an older man with adult sons from two marriages. Where have they been during that time? The records are silent, and a person is prone to provide a reason for the gap in the documentation, for there should not be so few entries for a man with such an occupation. He should be found mentioned in the island's written documents rather more frequently; this was quite prevalent with other Bornholmer families (57).

Above it was suggested that Peter Uf might have been married to a woman from Fyn, and an odd occurrence of chance supports this hypothesis. In the first half of the 1400s a Tue Pedersen lost his seal in Nørrekås Harbour, north of Rønne; which was recovered in a later century. He is not the Tue Pethersön of the Rani family, which we know had Harebjerg manor, for his coat-of-arms displays the Bild/Strangesen's transversed shield - therefore of the same family as the Archbishop Niels Joensen, Johannes Ufs mother's brother. His father may be Peder Strangesen. The latter's brother lived only on Fyn: Otte Strangesen recorded in 1377 and 1397Possibly Tue Pedersen came to Bornholm looking to found kinship, and stood at the gunwale of the ship and fumbled with his seal, so it fell into the sea? Was Peter Uf married to Otte Strangesen's daughter, and so came the name Otte in this way into the Uf-family? A name which otherwise was entirely unknown on Bornholm in that social circle. Did the family move to Fyn after this marriage, allowing their adscript peasants to run their Bornholmer farms? Was Cecilie Uf visiting her brother Peter Uf after her second husband's death, and while there she met Hr. Hartvig Limbek, her third husband? Is this the reason for the relative lack on Bornholm of written documents mentioning Peder Uf?

Otte Uf's his first marriage was with a widow of Skåne origin, namely Anders Galen's daughter from Skåne, and perhaps it is this connection that eventually brought him back to Bornholm. Their two sons inherited from their mother's brother, Anders Galen the younger, who died childless in Lund in 1522 - he had written a will in 1511 (58), where his heirs are mentioned: 'Mister Peder W, Cannik in Lund, my dear Relative. . . . Item my dear Relative Anders W.'

The assertion by Sigvard Mahler Dam that Peder Uf's wife was the daughter of Otte Strangesen (before 1350-after 1397) of Tange in Gudme district on Fyn seems to be based on two facts: 1) Otte Strangesen's brother Peder Strangesen's son Tue Pedersen is thought to have been on Bornholm in the early 1400s. Sigvard speculates that it is possible that Tue Pedersen arranged the marriage of his cousin to Peder Uf; 2) Peder Uf's sister Cecilie's third marriage was to Hartvig Limbek of Jelsore and Nebbegård in Vejle county, Jylland. Hartvig's previous wife had come from Fyn. Sigvard speculates that Cecilie's marriage must have been arranged by Peder Uf through his wife's relatives on Fyn. How else could a widow living in Hardeberga in Skåne get a husband from Jylland?

Michael EneRiis' database speculates that Peder Uf's wife might be the daughter of a Laurids Jensen (of Yrwæ near Landskrona?). That Laurids might be the son of Jens Pedersen (-1360-1377-), of Bellinge, 'markmand' of Falster island, and his wife - the daughter of Jens Falster. Possibly because one of Jens Pedersen's other sons was named Otte Jensen (died1397-1401), Commander (Hovedmand) of Saltø (near Næstved, Sjælland)?

From 'Landsdommer Patriciatet på Bornholm', article 1, by Sigvard Mahler Dam: On July 16, 1448 we meet the new chief justice (landsdommer) Sevid Nielsen, and he had apparently only just been appointed because on that date he confirms to the Archbishopric in Lund that he and his wife Kirstine have, as their fief for life, received one estate farm (hovedgård) and eight other farms in five parishes. These farms were most likely part of the domains of the office of the chief justice, and this letter it the first letter of endowment of a chief justice we know of on Bornholm. From the preserved seal of his daughter we see that the family had a coat-of-arms which is divided vertically and that the first field is half a lilac; which is exactly the same coat which the descendants of Claus Kjøller used at a later date. During Sevid Nielsen's tenure as chief justice there is a long period between documents, and the next time he is mentioned is the last time while he was alive: February 1, 1469 the Archbishop orders: 'Sevid Landsdommer is to summon Peder Lauridsen's heirs in Ibsker Parish for a claim by Per Lang in Walløse (Færs county in Skåne) against them.' Twenty years as chief justice is a long time and soon after he died.

Chief Justice Anders Uf married Sevid Nielsen's daughter, Anne, and from an undated letter it is known that this couple is endowed with a hovedgård and the eight farms which Sevid had been endowed with in 1448.The former endowment of 1448 stated that Sevid was to possess the farms as long as he lived, and this has to mean that he is now dead, and that the son-in-law Anders Uf had succeeded him as chief justice. In a later section of this article, a reference is made to Jacob Splidt, who after the death of Anders Uf (senior) married his widow, and became chief justice after Anders Uf, which Sigvard Mahler Dam states might be as early as, or before, 1487. An 'Anders Uf my dear relative' is mentioned in the will of Anders Galen of 1511, but the chief justice Anders Uf had been dead for many years. The Anders Uf mentioned in 1511 must be the same person as the Anders Uf (junior) who is listed in 1499 as being admitted to the University of Greifswald on November 26th under the name: 'Andreas W de Bornholm'. The student Anders Uf (junior), who would have been around 20-25 years old in 1499, must be the son of Otte Pedersen Uf and n.n. Andersdatter Galen; while Anders Uf (senior) may very well be Otte Pedersen Uf's brother.
Senest redigeret=11 Apr 2008
Peder Johansen Uf var væbner. Han var Frimand. Han blev født cirka 1380 i Bornholm