According to Kure's farm-list Oluf Ottesen Uf's wife is the daughter of Hans Myre of Fuglsangsgård, 6' Vdg. Ibsker. One problem with this is that Hans Pedersen Myre's year of birth is given as circa 1480, and Oluf's wife must have been born before 1495. 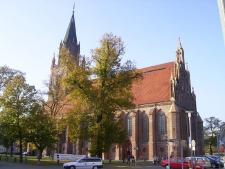 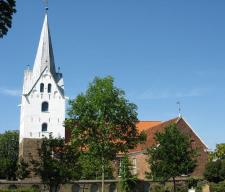 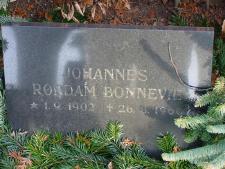 Pew is preserved in Klemensker church with initials PH and MHD, it last/latest to his (Jørgen Gagge's) wife, Margrethe Hans Datter.

After his death in 1596 inherited his 2 daughters all the farms he had received in inheritance with his wife Mette Myhre, and also Uf property - the eldest brought Myregård in Åker m.fl. to her husband Jørgen Henningsen Gagge.

The youngest married in 1606 to adelsmanden Hans Grabov, they inherited Simblegård, Myregård and more other farms. Their son was able to later sell all 30 farms.

Peder Hansen Uf, there resided on Simblegård in Klemensker, became chief justice in 1574 and received yearly tax payments from 11 farms, here under 20' vdg. in Klemensker, thus beyond to own/possess 6' vdg. had he also ownership right across 20' vdg. in Ibsker, until he quit judicial office in 1588.

In 1572 a meeting was held by Bornholm's Parliament to establish who had the right to the status of 'Frimand' (Freeman) on Bornholm. Of course, that meeting had a broader purpose: a war in which Lübeck and Danmark had fought side-by-side had ended two years previously, and there was another three years before the Lübeck 50 year claim to Bornholm was to expire; although Lübeck claimed that it had been given a further 50 years. In this predicament it was wise for the King to establish locally situated allies; and Bornholm's influential free-men, who normally would have been snubbed by the King and the true nobility, were now in a position to receive benevolent treatment from the Danish government.

At the "Frimandsmødet" held on September 6, 1572 there were 17 men namedas being in attendance: the brothers Jens and Hans (Madsen) Kofoed, Peder(Poulsen) Kofoed, Oluf Bagge, Peder Uf, Peder Myre, Jørgen Gagge, andalso ten other men only listed by their patronymic - among those were Bendt Hansen and Laurids Pedersen; and at which occasion three Danish Parlimentary advisers (Rigsråder) had been sent to preside over the meeting. The Kofoeds had no written proof of their freemen status; they were only able to give heartfelt and solemn words about faithful service. It seems they had an inkling of things to come, and therefore begged the King not to let himself be "seduced" by Lübeck's representative Sveder Ketting, "because you might expect that Lübeck only plotted to keep our island under their yoke." This is the first record in which we find the Kofoeds being mentioned as "frimænd". We know that they were related to Oluf Bagge and Peder Uf, and probably to several ofthe others. The question remains: did they already have claim to freeman status, or did they take advantage of the King's need for loyal followers - seeking acknowledgement of that status from their peers on Bornholm? It seems that they had to make certain commitments to the King in exchange for the full rights to freeman status.

A document dated March 28, 1574 tells us that Peder Hansen Uf was the Chief Justice (Landsdommer) for Bornholm at that time. A free-man (frimand) he was the owner of Simblegård proprietairgård in Klemensker parish, and Eskildsgård, 9' Vdg. Pedersker. His wife, Mette Hansdatter, inherited Fuglsangsgård (later known as: Gaggegård, still later as: I Klinteby), 6' Vdg. in Ibsker - which she later passed down to her daughter's son Claus Gagge.

On August 30, 1577 Peder Uf was endowed with thirteen farms that were under ecclesiastical jurisdiction, namely: six farms in Østermarie, one farm in Ibsker, two farms in Vestermarie, three farms in Klemensker, and one farm in Rutsker parish. A letter of declaration (dated April 27,1580) confirmed that he had property-rights equal to that other free-men on Bornholm. Coat-of-arms drawing in Heraldry Periodical, nr. 43,1981ep: contains a chevron (gavlsparre).
Senest redigeret=30 Jul 2009
Peder Hansen Uf blev født i 1536 i Pg. Simblegård, Klemensker, Nørre, Bornholm