Took over Rømeregård after his parents, who died before the probate protocols were introduced in 1681. At that time he was a Corporal in the cavalry. Later he would advance in rank: Cornet (Kornet)in 1691, and Quartermaster (Qvartermester) in 1699.

He married Birgitte Christensdatter from Pilegård; she died in 1720, and at the probate hearing Hans Rømer was questioned by his brother-in-law Jens Jensen about the inheritance of Hans' unmarried sister Boel. It seems that Hans was not eager to respond to this, saying that the legal proceedings held after his parents death had been held 40 years previously, and that he could not remember the details.

Boel had lived in his home for four years, and he had promised to look after her for the rest of her days, and give her an honourable funeral. Furthermore, should he die first, his heirs would fulfill this obligation. However, Jens Jensen was not satisfied with 'promises', he explained that his wife, Sidsele, the sister of Boel, had received 18 Silverdalers in inheritance, therefore he insisted that Boel receive the same amount. There was also the matter of 'jordepenge' (earth-money),that being the sisters portion of the proceeds of the sale of the farm to their brother Hans Hansen Rømer - this had yet to be paid out.

Hans replied that since Boel was an old maid near 70 years, he required 3 Marks weekly for her care, which he assumed would be tallied to his credit for the four years already spent under his roof. Regarding her share of the farm - that would be decided by the eight-man council when the time came. From this hearing you can see the situation for a single woman in the 1700s: she was legally a minor for her whole life. Boel had probably made a living working as a maid until she was about 65 years old, at which time she no longer had the strength.

Hans Rømer believed that he had done his duty regarding the care of his sister; while the much younger brother-in-law Jens Jensen was justified in getting all the facts - for if Hans Rømer died, then Jens would have to step in and be responsible for Boel.

The result of the eight-man decision is not known, but it did not matter in the end, since Hans Rømer survived both his sister Boel, and his other sister Sidsele and her husband Jens Jensen. We know that he lived to be 88 years old, though his burial in 1742 was not entered into the parish register - which was rather amiss for some years aroung that time period.

Note: In the August 28, 1735 probate for Kirstine Madsdatter, of 28' Slg.Nylars, we can find mention of a 'Hans Hansen Rømer i Rønne' who acted as the representative for Kirstine's absent daughter Martha Olsdatter of København. Is the man mentioned in 1735 Hans Hansen Rømer (c.1654-c.1742), or the above mentioned Hans Rømer (c.1679-1749) who was buried on June 8, 1749? If so, is it possible that Hans Hansen Rømer moved to Rønne, and thus his burial record can be found in the Rønne register? How do we 'know that he lived to be 88 years old' if no burial record has been found?

He and his brother Lars were among the 12 Bornholm free-men who signed the oath to the King on September 18, 1661. Owner of Rosmannegård, 27' Slg. in Knudsker parish. Said to be married to a Trine Cornelie Byell and Kirstine (died 1704 in Rønne) - it is uncertain which is to mother of which or any of Andreas Rosman's children. Kirstine is possibly the daughter of Peder Hansen Kofoed (1598-1648) and Elisabeth Madsdatter Ravn (circa 1605-1685)? 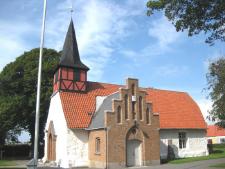