K, f. 6 november 1800, d. 19 februar 1867
Pedigree
Senest redigeret=27 Mar 2010
Henry Wright was born in 1750 in Kingston-upon-Hull, the son of a Henry Wright. He came to Helsingør, probably in 1762, and worked as shop-boy for Thomas Baildon until 1778. Thomas Baildon was a trader in wine and chinese goods, and was probably a good friend or relative of the Wright family in Hull, as the unusual christian name of "Major” occurs in both families. A further indication of such a link is that since Thomas Baildon had no sons that survived childhood, the Baildon family bible was passed on to a member of the Helsingør Wright family.

Henry Wright registered his citizenship as a shopkeeper in 1778, and began his business as a merchant and clearing agent for British ships at one of the most prosperous times in the history of Helsingør. Every year, thousands of ships on their way to trade with the countries around the Baltic Sea were required to stop at Helsingør to pay a toll before passing through Øresund. The Sound Toll had been introduced in about 1426, and for more than 300 years was a source of great wealth not only for the Royal treasury but for the citizens and shopkeepers of Helsingør. In the late 1700s there were many prominent British traders and shipping agents in Helsingør, who had made a speciality as "ships clearing houses”, dealing with the practical problems of paying the ship's tolls, as well as providing the British ships with fresh food and supplies. As the tolls were based on the value of the cargoes, which were often both large and valuable, the captains of the ships could often not pay the toll in cash, and the shipping agents would make them loans with the cargo as security. The agents thus had a significant investment in the success and profits made by the British shipping traders, and some agents built or purchased ships to trade on their own behalf. On their return journey through the Øresund, the ships would once again stop off at Helsingør to make settlement with their agent.

All the British trading companies were successful during this period, and within a few years Henry Wright had built up a substantial fortune. In 1788 Henry married Hedevig Christine Meulengracht, and purchased the former Meulengracht residence at Strandgade 3.

The old house was demolished, and on its site he built in 1791 an imposing 3-story merchant house and residence, which became a home for his large family.

In 1793, several of the leading figures in the British merchant houses, among them Henry Wright, took the initiative to start an English Church in Helsingør. The church was constituted on 25 August 1793 in Søstræde, but less than two years later the Rev. William Jackson fell out with his congregation. Refusing to resign his position, the church stood open for Sunday services but nobody came, and Jackson was formerly sacked in 1796. Jackson still refused to leave, took his case for unlawful dismissal to the high court, and in 1801 lost his case and his position. The church premises were sold at auction to John Good, another British merchant, and subsequently became a dance hall of ill-repute.

The beginning of the 1800s was a particularly difficult period for Denmark, and as a consequence for the shipping traffic through Øresund, for Helsingør, and for the merchant trading houses. In November 1800 more than 200 British ships with cargoes guaranteed by Helsingør agents were embargoed in Russian harbours as a consequence of a conflict between Britain and the Czar. Of these agents Henry Wright held interests in the cargoes of no less than 23 ships. Denmark's political difficulties continued with the Battle of Copenhagen in 1801, the Bombardment of Copenhagen in 1807, and the Napoleonic Wars, which culminated with Denmark declaring the state Bankrupt in 1813, and losing Norway to Sweden in 1814. Denmark was a ruined nation. The collapse of trade led to the inevitable decline of most of the British merchant houses in Helsingør, many of whom closed down their businesses and emigrated, while others became bankrupt. The scale of the disaster can be measured by the number of ships passing the sound: in 1796 more than 12 000 vessels paid tolls in Helsingør, but in 1807 there were just 121. After the war ended in 1814, the numbers of ships stopping to pay tolls immediately soared to 8000, but this was already too late for many of the remaining merchant houses which had built up huge debts.

No business papers survive to document the scale of Henry Wright's losses during this catastrophic period. Even after the upswing in the number of ships visiting Helsingør in 1814, Henry's financial difficulties continued. The loss of his wife in 1821 seems to have been the last straw for Henry personally, and led to a complete breakdown in his health. The company was now effectively being run by his son William Charles Wright and his son-inlaw William Sim. In 1823 Henry Wright junior, William Charles Wright and William Sim (who died in November 1823) all took citizenship in Helsingør, a preparation to taking over the company. The company's principle asset, Strandgade 3, was sold at auction, but this was insufficient to stem the bankruptcy of the company in 1824. Henry Wright senior rented a property ”Rolighed' for himself and his widowed daughter, Charlotte Sim, but this did not last long - Henry Wright died on 9 Jan 1825, and was buried on 14 Jan in Helsingør cemetery.

The Wright family business was restored by his son Major W. [1802-1878], as Helsingør once again prospered during the final two decades of the Sound tolls. The suspension of the Sound tolls in 1857 led to a decline in business as ships began to bypass Helsingør, an increasing trend as steam-ships gradually replaced sailing ships. Despite the changing times, Major Wright retained his optimistic and sociable life-style, and was a wellrespected member of the Øresundforeningen. He died in 1878, 76 years old. 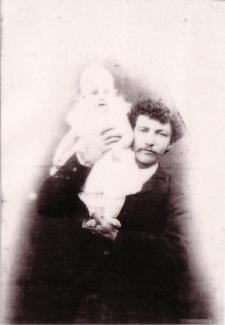 Shaun Murtagh meddeler: "from details shown on his death certificate, Ernest Julius Villaume probably immigrated to Queensland in approximately 1886. Ernest immigrated with his parents and siblings."

Ernest never married. However, Ernest and Julianna Marie Conradine Gundersen had three daughters. Ernest Julius Villaume died on the 13th January 1910 and was buried at the South Brisbane Cemetery. He was aged 40 years.
Han blev født 18 februar 1869 i Randers 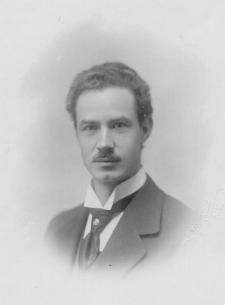 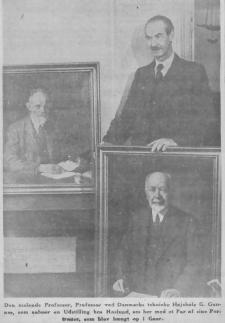